Use of Memes In Activism 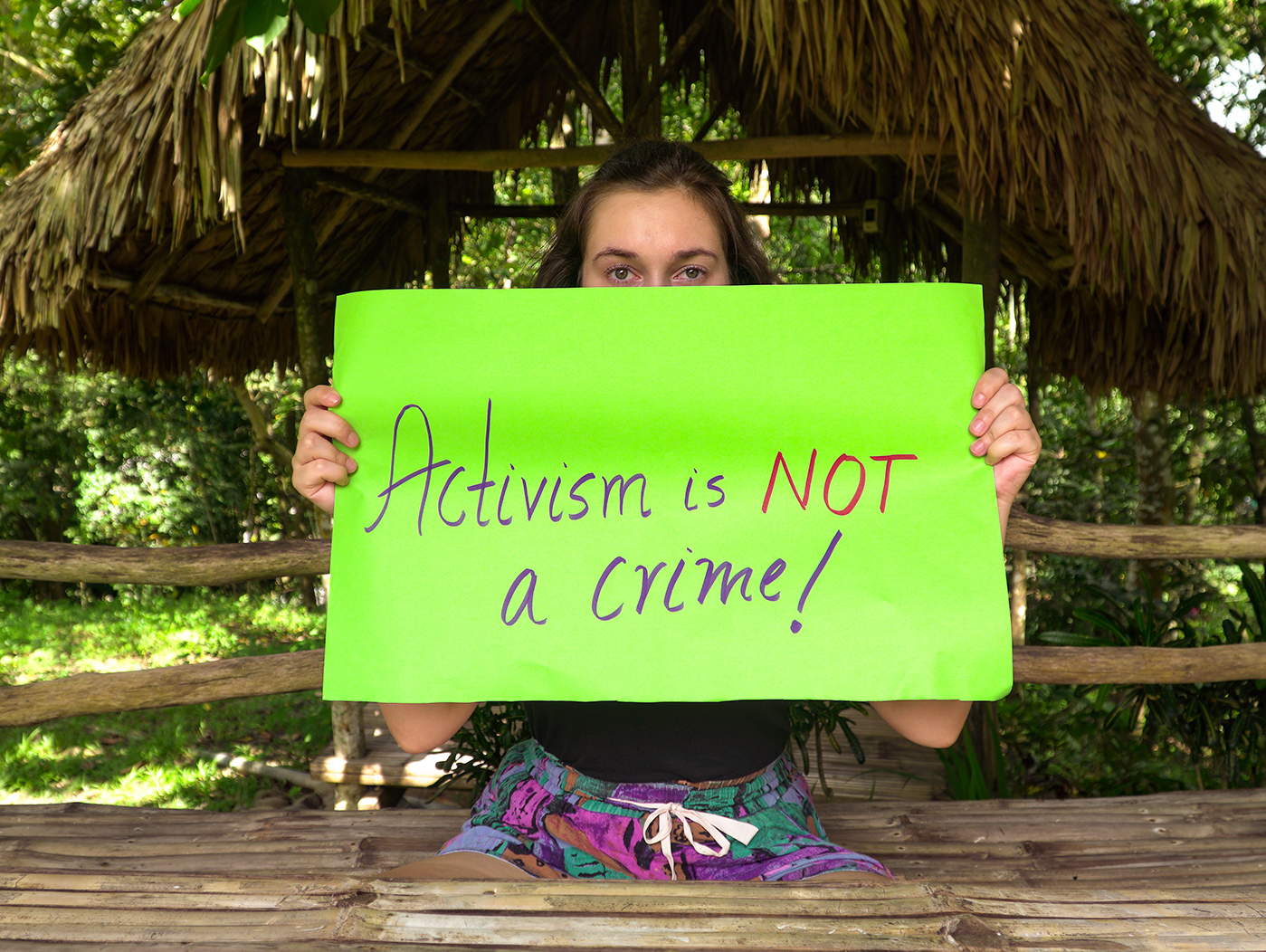 02 Mar Use of Memes In Activism

Posted at 09:21h in Blog, Featured, Highlights by coconetadmin

Memes have become a fundamental aspect of Internet culture and the native language of social media. With their ability to easily convey a message and to be easily shared, they have been adopted by many movements, especially in the Asia-Pacific. Meme creation is driven by remixing and recontextualizing popular images to create interesting ways of distributing messages. Memes within the context of movements tend to be inherently political. Using political humour on the Internet can contribute to the creation and consolidation of a network of shared meanings which then reframes content from mainstream culture. Humour is a means for politics to be explored and understood.

Memes incorporate elements of mainstream popular culture, which encourages the ordinary citizen to participate in movements. The Internet provides a space for image and language play that is absurd and full of juxtaposition and insider jokes. By utilizing humour and the shareability of memes, it becomes clear that memes can be used for the diffusion of information across the Internet because of their speed and capillarity on social media.

Memes are a cultural product based on social relations, memories, historic, geographic and economic references as well as specific conjectural aspects. Memes that Internet users post, share, and like best are what they find interesting and humorous, reflect their impression of a topic and affect or sensitize them to a topic. Memes can allow non-elite Internet users to yield influence and make their voices heard. Through this, memes can become a tool for grassroots action in human rights movements as memes can be utilized to spread messages quickly.

To demonstrate this, eight political memes from Southeast Asia will be reflected on. 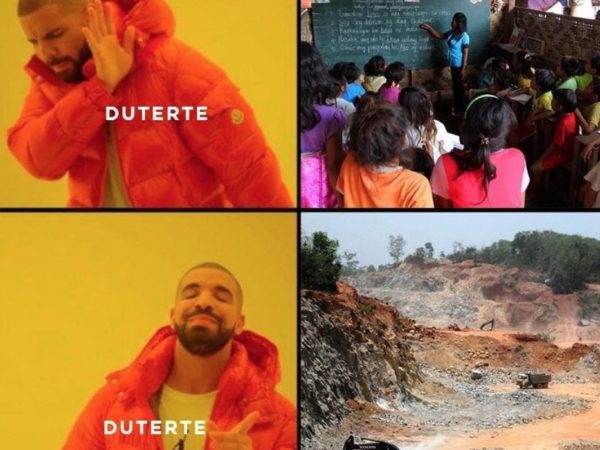 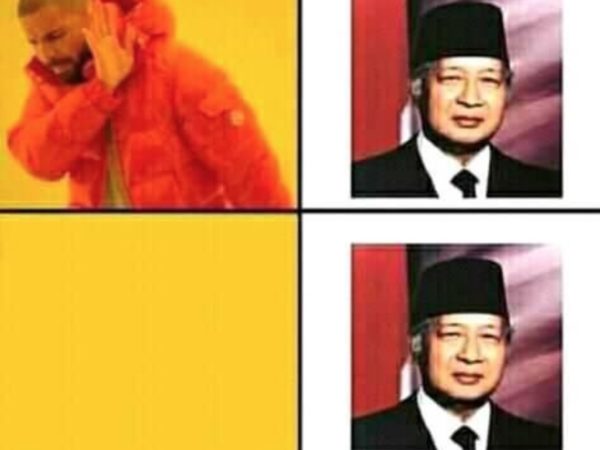 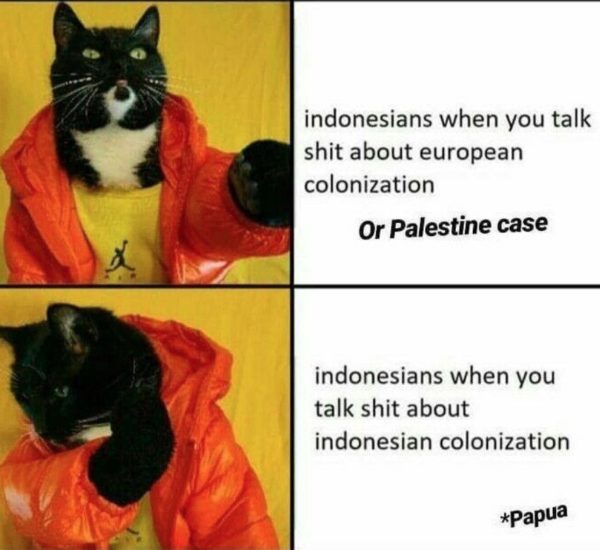 This meme takes on a popular format of utilizing a topical cultural image with an overlaid humorous text to make a political statement. This image is of former vice presidential candidate Sandiaga Uno with the current vice president, Ma’ruf Amin, before a national debate showing him paying respect to his elder as culturally dictated by kissing his hand even though he is his competitor.

This meme also uses a culturally relevant image overlaid with text to make a political point. This image, however, has been photoshopped to add different shoes and a communist bandana utilizing the ‘ugly aesthetic’ often used in memes. This meme is commenting on Bong Go – a Filipino politician – stating that students go up into the mountains in the night to work for the communist party. 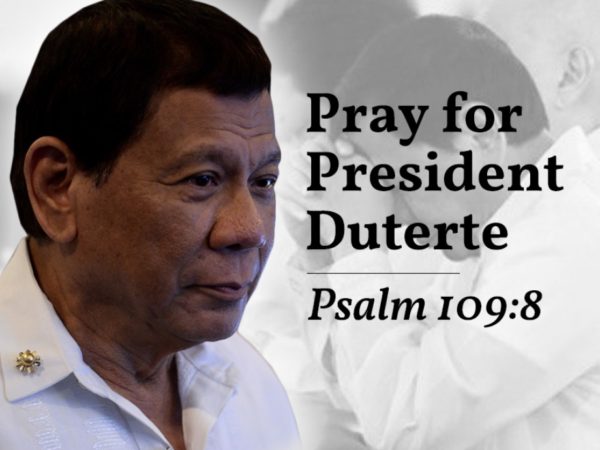 This meme is less focused on criticizing Duterte and more focused on making fun of him. Using humour this way is a common aspect of political meme culture. This meme was posted in a meme Facebook group soon after a report was released that Duterte had fallen from his motorcycle. Though some might see this meme and think it is supporting Duterte, this meme, in fact, does nothing of the sort.  A reading of or direct knowledge of Psalm 109:8 – “May his days be few; may another take his place of leadership” – is required to fully understand the humour within the multiple layers of context used in this meme. 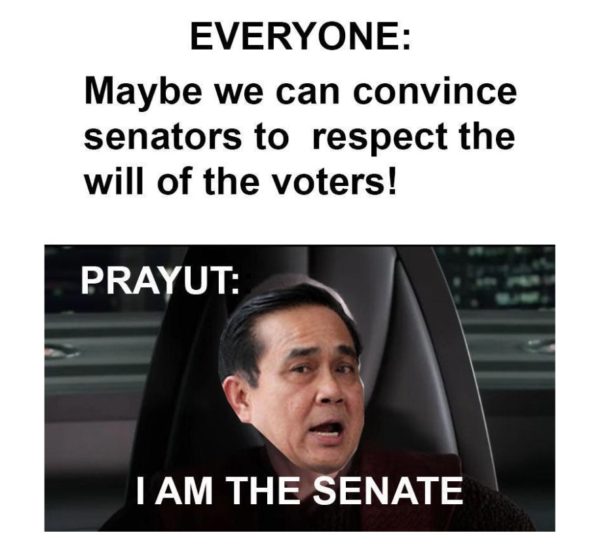 This is a remixed version of the popular I Am The Senate meme. This meme was remixed to criticize Thailand Prime Minister Prayut Chan-o-cha. Prayut is not only the Prime Minister but he also serves as Thailand’s Defence Minister and head of the Royal Thai Police. Therefore, by repurposing this meme, it is able to criticize Prayut’s overarching control of the government that goes against the will of the people.

This meme comments on the Thai election and a secret parliament vote that resulted in the former Prime Minister Abhisit Vejjajiva quitting parliament after his party – the Democrat Party – voted to join the junta-aligned coalition backing Prayuth Chan-o-cha’s bid to become Prime Minister. The Distracted Boyfriend meme was remixed with photoshopped images to represent the feelings of the citizens. Here, the distracted boyfriend has the Democrat party logo photoshopped on him. He is looking back at another girl with the photoshopped face of Prayuth Chan-o-cha while his upset girlfriend has text over her that reads ‘us citizens’. Through this, a message of feeling ignored by the Democrat party is conveyed.

Carmen Ferri is the Asia policy and countering hate speech intern at the Association For Progressive Communications (APC) and is currently based in the Philippines. Carmen holds an MA in New Media and Digital Culture from the University of Amsterdam and an undergraduate in Liberal Arts: Cultural Studies and Sociology from Maastricht University. Her areas of interest include subculture construction in online spaces, online community building, issue mapping, and online political movements.