The Myanmar government is hiding the truth of Arakan conflicts

On May 3, 2020, the Myanmar government restored internet access in Maungdaw township, one of Myanmar’s nine townships in Arakan (formally known as Rakhine State) and Chin State without internet access for almost a year. The reason, they reported, was due to more stability in the area. But in reality, the grounds for reinstalling the internet are different from the reported reason. In fact, the government and military are using the internet shutdown to monopolize information, thereby robbing people of the truth on Arakan conflicts.

For the government of Myanmar, there are two burning political issues in Arakan: the question of armed revolution by the Arakan Army (AA), which the government has declared a terrorist group, and the case of ethnic Rohingya Muslims, who the UN International Court of Justice said should be protected from genocide and military violence. The two issues are related to each other – the self-determination of the Arakan region must consider the group rights of Rohingya Muslims, while the group rights of Rohingya Muslims must also be compatible with the autonomy of the Arakan community.

Countering AA through information and media

The military strategy to fight the AA and other rebel groups in the country can be summarised into cutting them off in four key areas: recruitment, food, budget, and information. The first three parts of this strategy have resulted in tens of thousands of innocent civilians displaced and moved to internal refugee camps. A number of villages have also been burned down in order to separate rebels and local supporters. From December 2019 to mid-April 2020, the nongovernment organization Burma Monitor reported over 163,000 displacements, 366 deaths, 406 injuries, and 45 arrests in Arakan and Chin State alone.

The fourth part, information, means to censor news and media about the Arakan conflicts. To do this, the government has sued and continues to sue local and international media under different laws such as counter-terrorism and unlawful association. Among the media outfits sued were national organisations Voice of Myanmar and Khit-Thit Media, as well as local media like Narinjara and Development Media Group (DMG). On top of this, websites by the AA and local media remain blocked in the country, meaning audiences cannot access information on them through locally operated telecommunication channels.

Due to the lawsuits, domestic media no longer interview the AA to get their side of the story, which in turn has led to one-sided or biased news, and even government and military propaganda. Here are four prominent examples of this, all within April 2020. 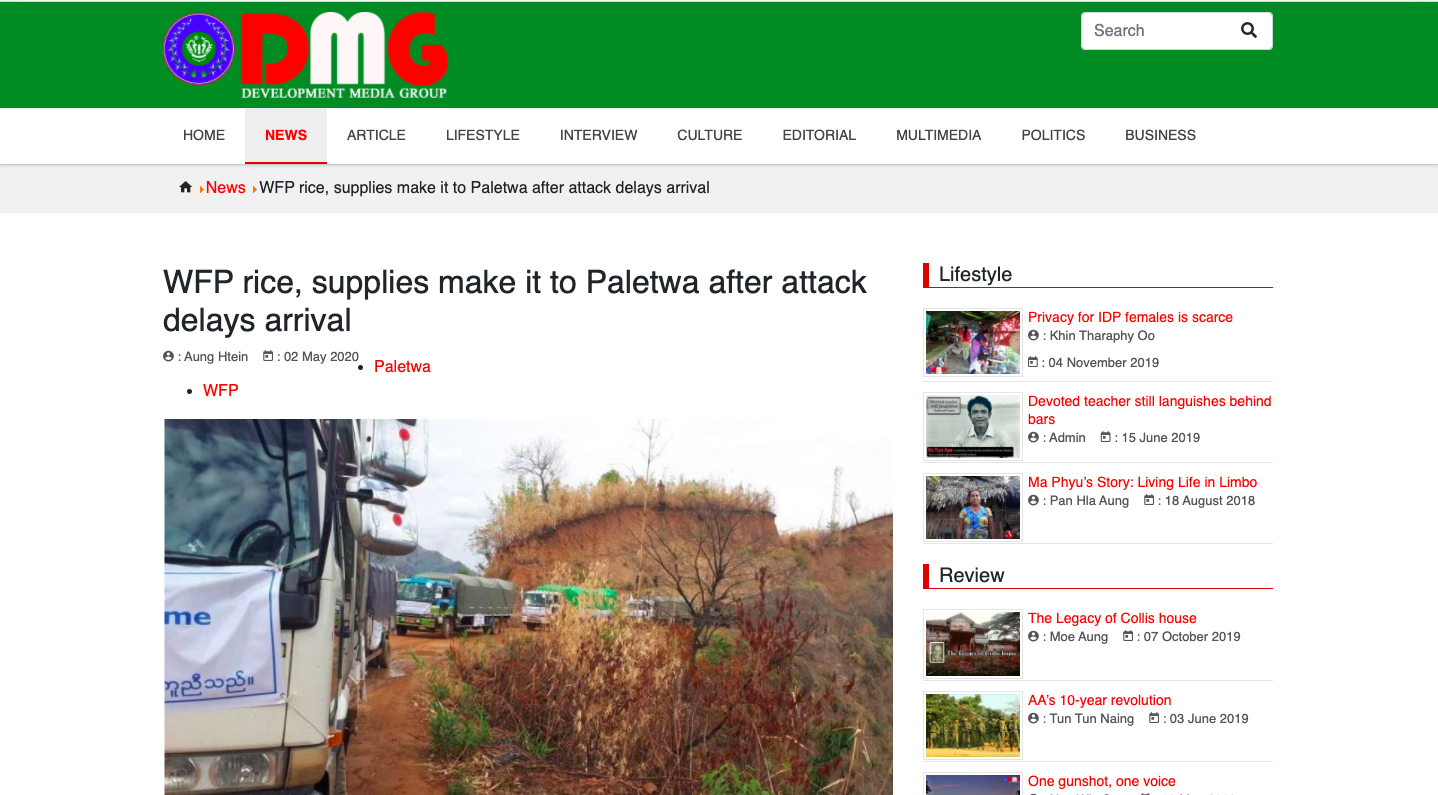 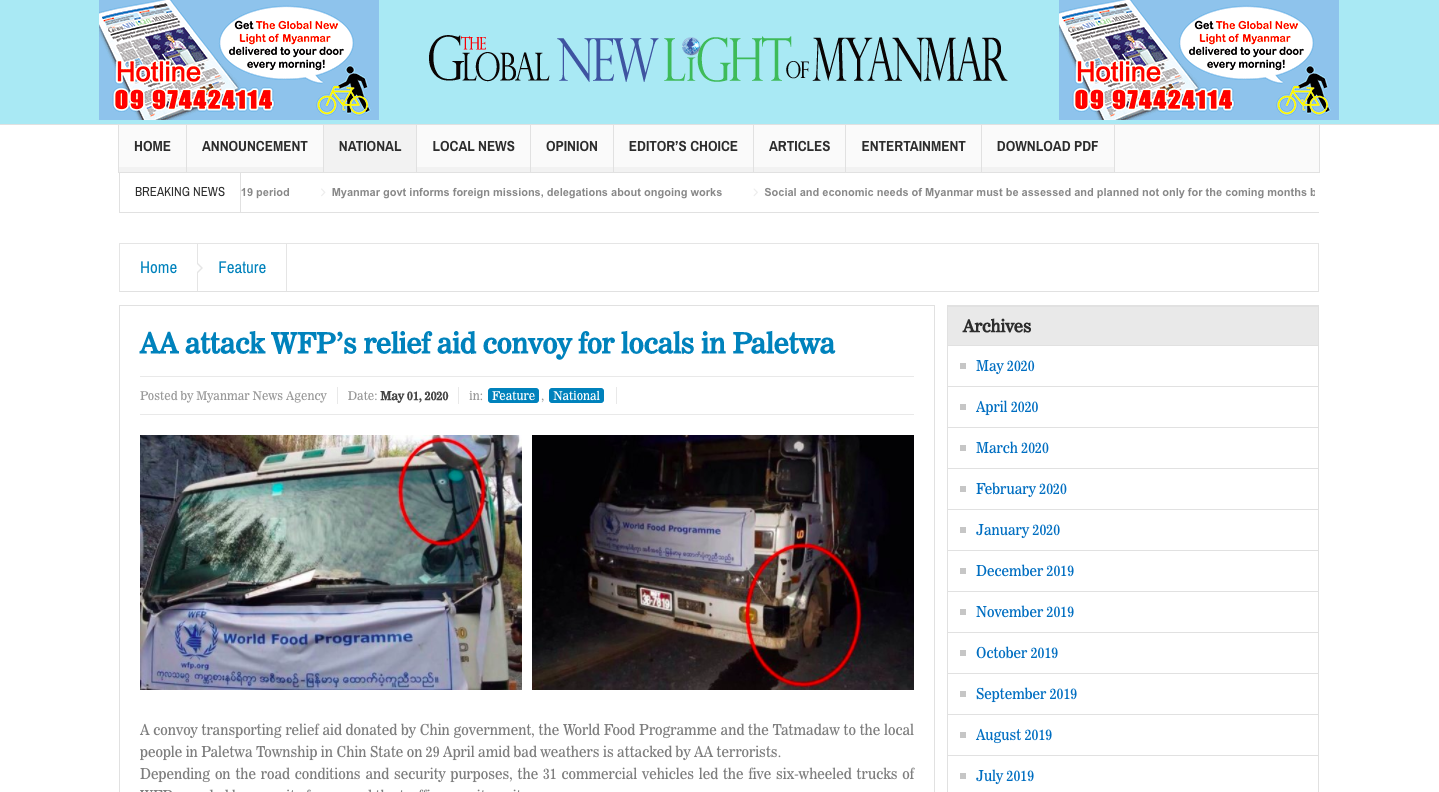 The April 29 shooting of a World Food Programme truck in Paletwa Town, Chin State was reported differently by national media (left) and state media. Whatever the truth is, it is alarming that the Arakan Army is automatically blamed without prior investigation, and the people in the conflict-stricken area not consulted.

On the morning of April 13, 2020, artillery shelling from the military’s Battalion No. 550 hit the Yangon-Sittwe Highway near the village of Kyauk-Sike, Ponnagyun township. Eight innocent civilians were killed and seven more were injured. This story was covered by a number of regional and international media like Reuters, Aljazeera, Radio Free Asia (RFA), and The Irrawaddy, which highlighted the event while also interviewing family members of the deceased. There was also evidence showing that the artillery and weapon marks were from Myanmar military products. However, the state media, especially military-owned ones like Myawaddy TV, reported there was no such event that day and that all news and information on it were fake and fabricated.

The second most prominent example is the April 20 killing of the World Health Organization (WHO) driver in Min-Bra Township, one of the conflict areas with no internet access, while carrying COVID-19 samples to be tested in Yangon. Both the government and the AA denied being behind the attack. Whatever the truth is, international media remained neutral in their coverage of the attack. But state media coverage and messaging to the local community concluded it was an AA attack, citing only statements from the government and military. The one-sided nature of the story has reportedly made the local people in Arakan angry and disappointed. Weeks later, the Myanmar government formed a committee to investigate the attack. The investigation is still ongoing, but based on previous statements, it is clear the commission will say it is an AA attack. In fact, presidential spokesperson U Zaw Htay already said even before the end of the investigation: “It (WHO car) was attacked by AA and we formed a committee to investigate it in order to fulfil the international demand”.

The third striking incident of the government’s monopolization of the truth is the April 21 killing of Arakan youth Kyaw Min Chey in May Lwan village, Min-Bra township. Government media like Global New Light of Myanmar and Myawaddy reported that an AA member (not a civilian), while on his motorbike, was killed after being caught with a Chinese-made grenade and a knife in a toolbox. But reports from RFA told the truth: After coming back from fishing, Kyaw Min Chay was killed by military soldiers at the entrance of his village, his mother a witness. After his death, the soldiers gave his family 150,000 MMK (or USD 104) as compensation, saying, “We are so sorry, and it is just usual thing happened in the time of war.” The family accepted the money because they were afraid of the soldiers.

The final and newest occurrence happened on April 29, when World Food Programme trucks were attacked while transporting food to Paletwa Town in Chin State. As usual, the government accused the AA, while the latter denied the claims. Paletwa is a mountainous and conflict-stricken area with no internet and media accessibility. Thus, only news by government media can reach it. As there remains a huge question of who to believe in this situation, it is all the more essential that non-government and international media be allowed to reach the area.

The arrest of the Nay Myo Lin (from Voice of Myanmar) shows that the Myanmar government has failed to take into account calls from various media freedom groups to protect journalists’ safety andfreedom of the press. IFJ urges the authorities to drop the case against Nay Myo Lin as the VOM was conducting a legitimate interview in response to a recently introduced ruling.

These four examples have shown us how the government and military manipulate and monopolize news and information on conflicts in Arakan. Continuing to do so, however, can potentially escalate this conflict in the future. After all, the real motive of restoring the internet is less about the armed conflict or stability, and more about addressing international pressure, such as allowing the Rohingya Muslims’ voluntary repatriation. These efforts have since been suspended due to COVID-19 and the increasing number of cases in neighbouring Bangladesh. On top of that, the armed conflict in Arakan shows no sign of ceasing or reducing despite the AA’s declaration of a unilateral ceasefire till the end of May 2020 due to the pandemic. These recent decisions have led to criticism of Myanmar State Counselor Aung San Suu Kyi, thought by most democratic Burmese and non-Burmese ethnic people to be a moderator or mediator between the two sides of the armed conflict. It is also clear that these events have led to more identity-based politics, like Burmese vs non-Burmese people.

Let me highlight three sentences from the book 1984 by English novelist George Orwell: “War is Peace”, “Freedom is Slavery”, and “Ignorance is Strength”. The Myanmar government and military, like the book’s Ministry of Truth, are trying to rob the truth in Arakan conflicts, thus making people “more fearful” and “less knowing”. As the local people in Arakan become more fearful, they become mute. As the people in Myanmar become less knowing, they become blind and deaf.

Covering up these atrocities in Arakan makes “Wrong into Right” and “Right into Wrong”.

Kyaw Lynn is a postgraduate student majoring in Political Science at the University of Yangon in Myanmar. He is also the chairperson of his university’s Political Science Association and one of the founders of Amnesty Arakan Team.