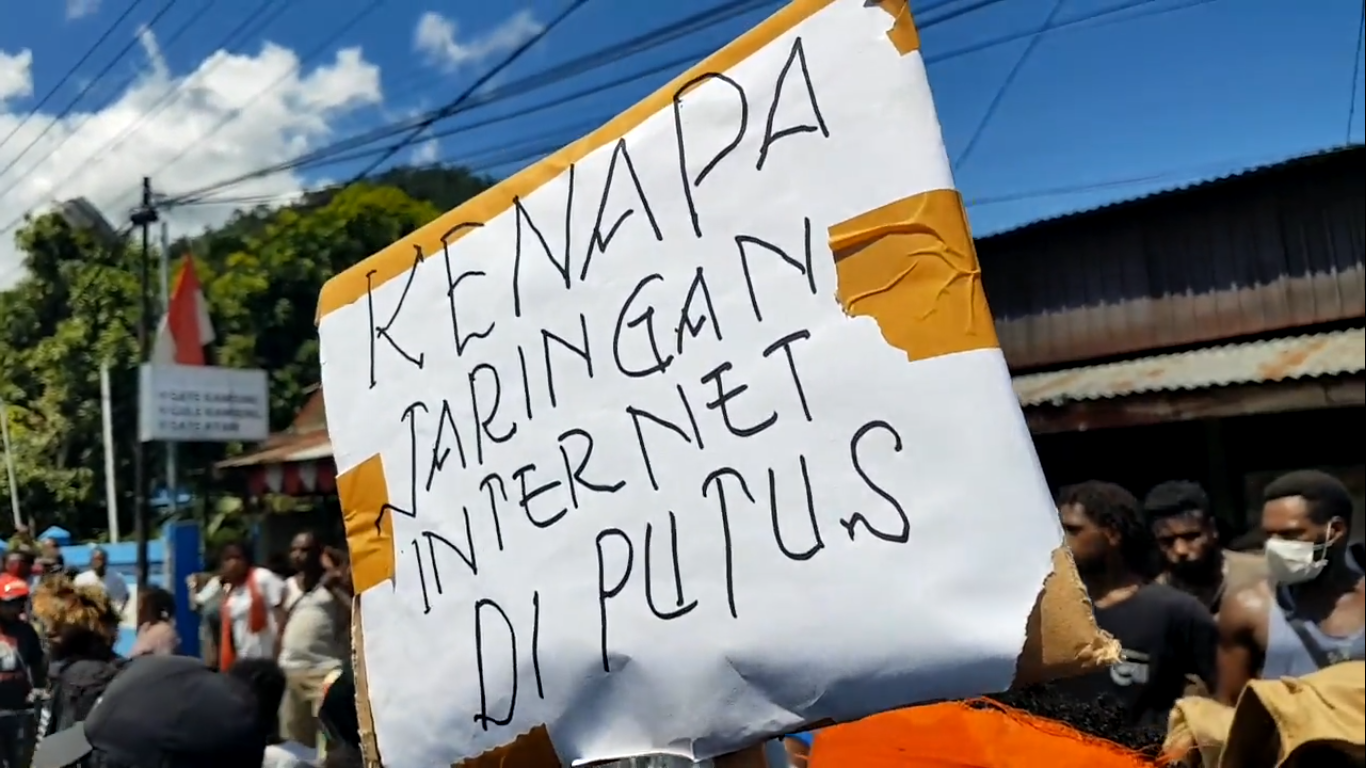 “Why was our Internet connection shut down? (edited)” Screengrab from the video “The Internet Shutdown in Papua”  by West Papuan Updates, used with permission.

Earlier this month, the Jakarta State Administrative Court declared as illegal the internet shutdowns in Papua and West Papua enforced by the Indonesian government in 2019. The case on the month-long shutdown, from August 19 to September 28 last year, was filed by a coalition of civil society groups working in Southeast Asia. Part of the coalition is SAFEnet, which was present at the Coconet digital rights camp.

The victory of the Press Freedom Defender Team over the lawsuit against the Minister of Communication and Information and the President of the Republic of Indonesia, is a good example of how citizens can respond to government’s unlawful management of public communication infrastructure like the Internet. The long process, starting from the face-to-face meeting with the Ministry of Communication and Information, to creating an online petition, eventually had to be brought to a legal route. The Press Freedom Defenders Team includes SAFEnet, which was present at the second Coconet digital rights camp.

The ruling is also even more important in the context of debates in freedom of the press and freedom of expression in and about Papua are framed within the hyper-nationalism narrative of the status quo. After all, the shutdown was implemented to quell the protests against racism and discriminations of Papuans.

In the case of Papua and West Papua, there were at least two incidents that laid the ground for Internet access restriction during this period. One is the siege of the Papuan Student in a dormitory in Surabaya and other racist acts in Malang, and the second is the increased tension in anti-racism demonstrations in Papua and West Papua, which was met with excessive force carried out by the security apparatus.

The Indonesian Ministry of Communication and Informatics and the Cabinet Secretary, in eleven press releases, stated that the Internet access blocking was a way to quell “the spread of hoax and provocations”.

This internet throttling was also preceded by a previous incident: On May 22, 2019, the Ministry of Communication and Informatics came out with a press release titled the “Throttling of Some Social Media and Instant Messaing Platforms”. The head of the ministry, Rudiantara, stated that the throttling was done based on the ITE (electronic information transaction) Law, specifically on content management.

Indonesia's IT Minister Rudiantara says the government is limiting social media activity to control the spread of misinformation and hoaxes during the election protests. Explains the trending #instagramdown and #WhatsAppDown topics

This internet throttling was triggered by the announcement of the 2019 Presidential Election results in April 2019.

In another press release, Rudiantara outlined the three steps in which the Indonesian government implemented the throttling:

Aside from the Ministry of Communication & Informatics, the Coodinating Minister of Politics, Law and Security, Wiranto, also stated that the government had limited the access to social media to internet users in Indonesia.

A number of active social media users in the archipelago, reportedly reaching up to 150 million or 3/4 of the total population, expressed their protests against government decisions.

What’s next after the ruling?

As more support for human rights gains traction, threats towards the press and human rights defenders have also spiked.

The internet throttling in Papua and West Papua, which threatens one of the main pillars of democracy, is compounded by the high value of losses estimated to be around IDR 2.6 trillion (USD 184 million).

The ruling, a definite victory for the Press Freedom Defenders Team, demonstrates the persistence of civil society and the press in fighting for citizens’ digital rights, especially in accessing information and the right to security.